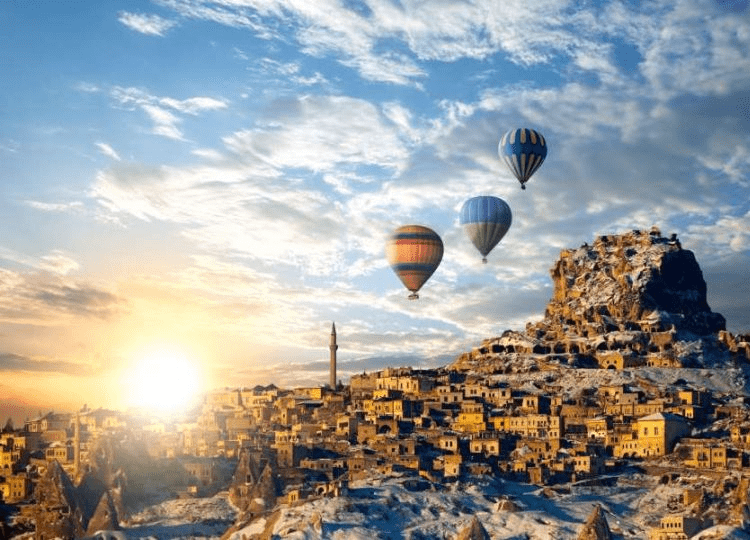 Located on the central Anatolia plateau within a volcanic landscape sculpted by erosion to form a succession of mountain ridges, valleys and pinnacles known as “fairy chimneys” or hoodoos, Göreme National Park and the Rock Sites of Cappadocia cover the region between the cities of Nevşehir, Ürgüp and Avanos, the sites of Karain, Karlık, Yeşilöz, Soğanlı and the subterranean cities of Kaymaklı and Derinkuyu.

The area is bounded on the south and east by ranges of extinct volcanoes with Erciyes Dağ (3916 m) at one end and Hasan Dağ (3253 m) at the other. The density of its rock-hewn cells, churches, troglodyte villages and subterranean cities within the rock formations make it one of the world's most striking and largest cave-dwelling complexes. Though interesting from a geological and ethnological point of view, the incomparable beauty of the decor of the Christian sanctuaries makes Cappadocia one of the leading examples of the post-iconoclastic Byzantine art period.

It is believed that the first signs of monastic activity in Cappadocia date back to the 4th century at which time small anchorite communities, acting on the teachings of Basileios the Great, Bishop of Kayseri, began inhabiting cells hewn in the rock. In later periods, in order to resist Arab invasions, they began banding together into troglodyte villages or subterranean towns such as Kaymakli or Derinkuyu which served as places of refuge.

Cappadocian monasticism was already well established in the iconoclastic period (725-842) as illustrated by the decoration of many sanctuaries which kept a strict minimum of symbols (most often sculpted or tempera painted crosses). However, after 842 many rupestral churches were dug in Cappadocia and richly decorated with brightly coloured figurative painting. Those in the Göreme Valley include Tokalı Kilise and El Nazar Kilise (10th century), St. Barbara Kilise and Saklı Kilise (11th century) and Elmalı Kilise and Karanlık Kilise (end of the 12th – beginning of the 13th century).

Prev About Hasankeyf, Batman Next About Gallipoli, Canakkale