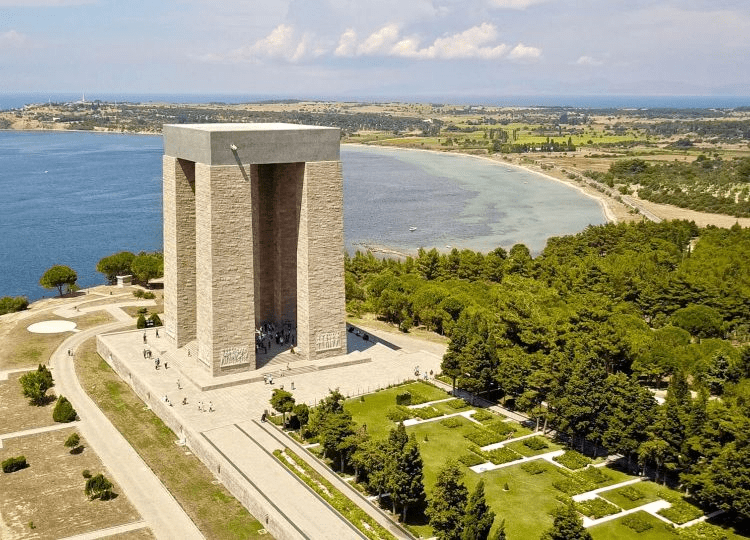 The Gallipoli Peninsula extends southward between the Dardanelles Strait and Saroz Bay. Turkey is located in north-west peninsula, is also the last piece of land south-east of the continent. It connects to Thrace with a narrow (5 km) Bolayır isthmus in the north. The Gelibolu district is located on the north-east coast of the peninsula with the same name, at the point where the Dardanelles Strait opens to the Sea of Marmara.

Gallipoli, which is known as the Galli Police, which means good and beautiful city, was the first time in history of the Hittite Empire. After the disintegration in 1200, it is seen that the Phrygians and the Lydians who followed them became important during their transition to Anatolia. In 545 BC, when Lydian king Croesus was defeated in the battle with the Persians, the Persians defeated the Lydian kingdom. Thus, the Persians gained superiority around the Çanakkale Strait. Gallipoli was then dominated by the Spartans, Macedonians, Pergamans, Romans, Byzantines, and most recently by the Turks.

The Gallipoli Peninsula has been the route of many peoples throughout history. Therefore, some fortifications were established at strategic points. The city of Gallipoli began to come to the fore as a fortress during the Roman administration period. The city was first attacked by the Goths under the Byzantine administration and then by the Huns. Kale has become an important port and trade center over time. This region was also affected by the Arab armies' flights to Istanbul. Crusaders reached Anatolia through here and Gallipoli in 1204 under the administration of Latin people.

In the last period of Byzantium, the Turkmen principalities, which started to operate in the Aegean and Marmara coasts, targeted the Gallipoli peninsula. Then, the Ottoman forces in the administration of the son of Orhan Bey, Suleyman Pasha, came to the peninsula in the capacity of an ally of Emperor Kantakuzenos and the Süleyman Pasha Çibri Mosque was given as a base. This is the foundation for the Ottomans. Suleyman Pashabir, who started to act independently, flocked to Thrace and to Gallipoli on the other. In the Ottoman Empire, Gallipoli became an important base of movement for the Thracians and the Balkans, and gained importance as a gateway and naval base for the Ottoman armies. Gallipoli, which remained as an important military naval base until the conquest of Istanbul, was heavily fortified during the period of Fatih and began to lose its feature of being the naval base in 1515 when the Haliç shipyard was commissioned in Istanbul.

After the conquest of Gallipoli was a sanjak and sanjak center as well as the first Pasha of Rumeli. He later gained fame as a maritime administration center. The head of the Ottoman navy captan-ı derya center here. II. Seven of the 26 artifacts made during the period of Murat in Gelibolu have survived, and most of the buildings in the Fatih period have disappeared.

In 1915, Gallipoli was bombed in Gallipoli Peninsula Canakkale battles and destroyed in some places. The city was abandoned on 3 October 1922, although it was occupied by the Greeks on August 4, 1920. Gallipoli became the center of the province in the beginning of the republican period (1923) and continued until 1926 and was transformed into a district center.

Prev About Cappadocia, Nevsehir Next About Ephesus, Izmir