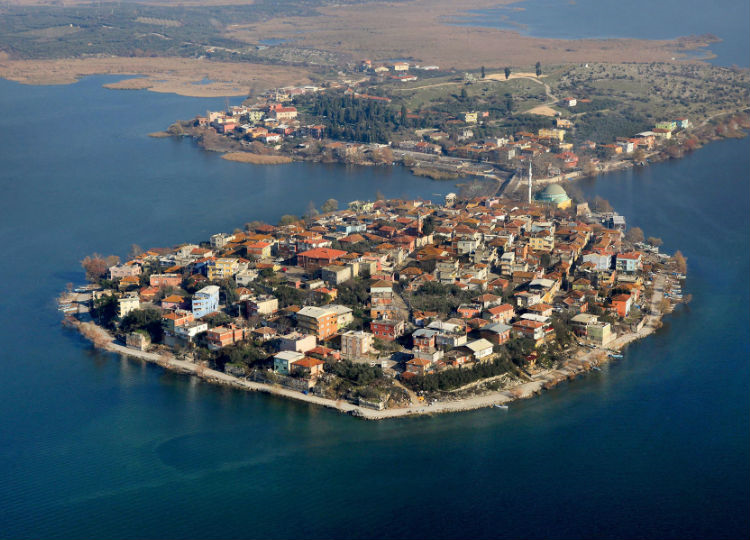 Gölyazı is one of the richest ancient settlements of Bursa. Founded on a deep peninsula in the history of the Gölyazın BC. It dates back to the 6th century. According to written sources; The ancient name of Gölyaz is Koc Apollonia ad Rhyndacum aç originating from the ancient Ryndacus river we call Orhaneli Stream (Kocaçay) today.

Apollonia was the god of light in ancient times. It is known that there were nine cities in Apollonia, which were founded in ancient times in Anatolia. This name can be separated from the other cities, Aizonai (Çavdarhisar) feeding the lake of Apolyont (Uluabat) to the river called the Rhyndacus river is mentioned in the sources.

Gölyazı, which developed in the Roman period, gained more religious works in the Byzantine period. Some information related to the region, which has not been carried out until now, has been obtained by examining the coins found here. In the region, BC. In the 1st century, crayfish embossed coins were beaten in Apollonia. Plenty of Byzantine empire coins were also found in the region. After the 1303 Dimboz victory, Osman Gazi opened the Gölyazı region to the Turks. Both the region and the islands on the lake of Uluabat Alyos and the monastery is located in the Byzantine ruins. In addition to the ruins of the ancient fortress known as sur Deliktaş antik and an aqueduct, the ruins of the Temple of Apollo, the ruins of the ancient theater, the ruins of the ancient ruins, the ruins of the peninsula in the vicinity of the peninsula. Hagios Georgios Church built by the Greek minority who lived here in the 13th century and the Monastery of Hagios Konstantinos Monastery with its ruins on Manastir Island are the most interesting historical ruins of the region. The site is also under protection by declaring an SİT area. Today, the 400-year-old plane tree, known as the doğa weeping tree ın and at the head of the bridge that connects Gölyazı with the peninsula, is a natural wonder worth seeing.

Gölyazı has important features in terms of common history of Turks and Greeks. Gölyazı, a former Greek village and inhabited by Selanik migrants, is now a settlement where the Greeks and Greeks lived together in the Ottoman period. The Turkish immigrants who came to exchange agreements in 1924 were in harmony with Gölyazı and its surroundings, and developed environmental culture with their diligence.

Uluabat Lake is home to the magnificent water lily flowers, which are completely protected and which give its name to the district it is connected to. It reflects a different image with its depth and hazy air between 2 and 4 meters. The livelihood of the Gölyazı people is agriculture, fishing and tourism. In the lake, the pike, carp and peasants live a small fish species called az Feki Göl. The crayfish, which is the symbol of Uluabat, has already taken its place in the memories of being a source of livelihood for the people of the region. Trees remaining in the water by the rise of the lake in spring, ducks floating in these waters, fog covering the lake, reed zones, fishing women caught in their boats, cobbled streets; known as Apolyont in ancient times, this village is only a few of the beauties.

Prev About Ihlara Valley, Aksaray Next About Göbekli Tepe, Sanliurfa