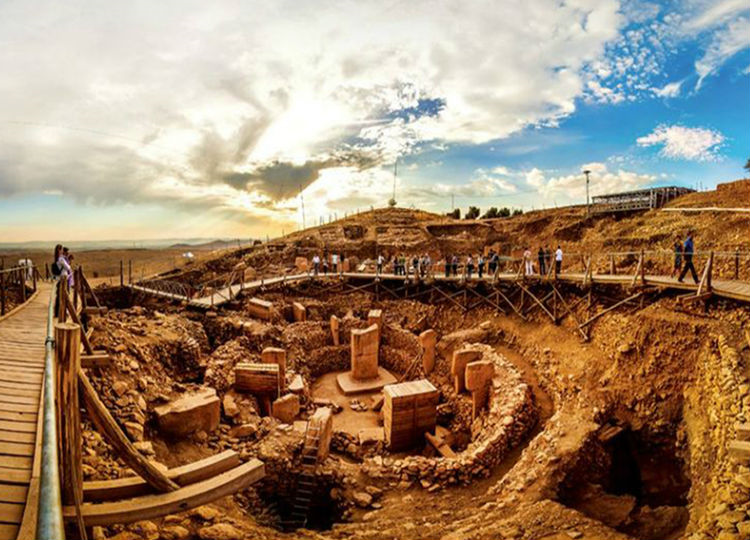 Göbekli Tepe is located 15km northeast of Şanlıurfa Province on the mountainous area near Örencik Village.

Göbekli Tepe, as in the other Neolithic settlements, is not on the coast, the valley or the plain, and has a dominant position on the view and the scenery, over a long ridge that limits the Harran Plain to the north.

Göbekli Tepe, which is about 12,000 years old, can be said to have the capacity to change some of the theories accepted in world history. There are no written sources on the daily life and world view of the Neolithic hunter-gatherers who have built settlements / habitats such as Göbekli Tepe.

Thanks to the excavations and researches that have been going on for nearly 20 years, the findings of the Göbekli Tepe were some sort of meeting point. It was learned that there was a kind of gathering center for various hunting groups. Based on the similarities in the decorative elements of stone tools, plaques and similar instruments in the region, we can talk about a collection / hunting basin of approximately 200 km in diameter.

A wide range of different motifs and repetitive symbols (and their different combinations) at Göbekli Tepe suggest that they are not just intended to be ornamental, but rather, they have an extraordinarily complex-histological content with a narrative and narrative character.

Interestingly, the symbols and motifs discovered at Göbekli Tepe have been found in many other Neolithic sites, stone vessels, tools thought to be used to flatten the arrows, and many other objects. This may indicate the existence of a wider community with a common belief system, mythological traditions and iconography. Göbekli Tepe may have been one of the ritual centers of this vast community.

Prev About Golyazi, Bursa Next About Grand Bazaar, Istanbul