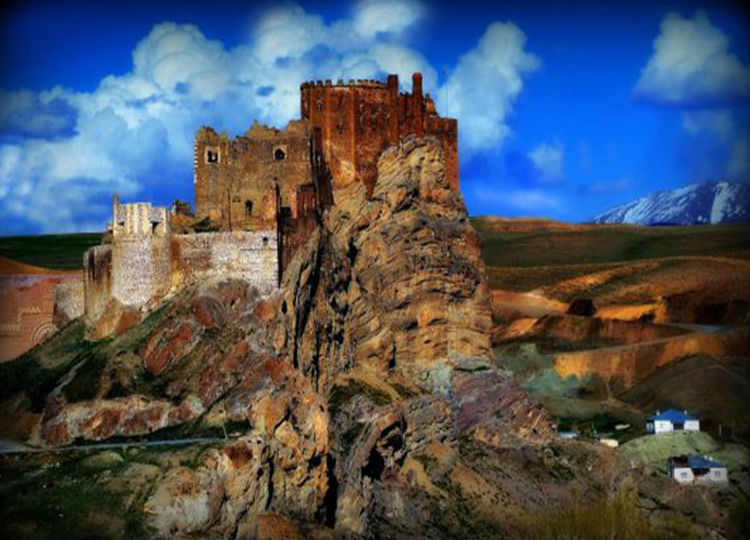 It is located on the Van-Hakkari highway, Hoşap (Güzelsu) in the Van district of Gürpınar. Hosap is 60 km to Van and 40 km to the center of Gurpinar. Hoşap Castle, which is built on a steep and steep rock mass northwest of the Hoşap River, consists of the inner fortress and the outer castle to the north of it.

The Castle of Hoşap, which dates back to the Urartu State, has survived to the present day as the Mahmoud Beys of the Ottoman Empire. It was built by Mahmudi Suleyman Bey on H. 1052 (1643) according to the inscription on the entrance to the inner castle.

The outer fortification walls are surrounded by the walls of the land, surrounded by eastern, northern and western walls. The eastern walls were partially destroyed and the western ones were largely destroyed. Some of the bastions supporting the walls have survived, and the eastern and western gates are completely destroyed. A watchtower is located in the northeast of the outer castle. Today there is a mosque ruin and village houses. The inner fortress is built on a steep, northern sloping mass from the south.

North, east and west fortress body walls, bastions, and towers were fortified and a second fortification was made to the northeast. The castle is entered through a gateway to the entrance sign on the north side, close to the entrance. On the western facade of the sign, which is arranged as a crown gate, inscriptions, blind windows and lion reliefs provide a certain mobility. In addition, the original wings of iron doors still function. Inside, there are complex structures which are described as Mahmudi Palace. These are listed on the south side of the castle.

The lodge is located in the top and east parts, the harem just west of it and the greeting at the western end. Masjid, dungeon, oven and cistern are other structures of the inner fortress. XIX. The Hoşap castle, which was abandoned in the mid-century, has largely survived to its present day. For this reason, it is one of the remarkable symbol structures of the region.

Prev About Akdamar Island, Van Next About Ihlara Valley, Aksaray